6000 km since conversion: what have we learned? 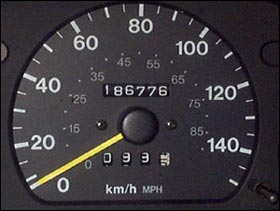 Next week marks the 4th "re-birthday" of the ForkenSwift. That's four years and 6000 kilometers (about 3700 miles) of electric motoring since being converted and legally registered as an EV.

Seems like a good opportunity to look back and ponder some of the big questions:

1) How reliable has it been?

In a nutshell: vastly more reliable than the gasoline car it used to be!

Before electric conversion, this car's gas engine & related systems were getting worn out: the engine was tired, it burned oil, and needed a serious tune-up; the gas tank and fuel lines were getting rusty; and the exhaust system was starting go.

The fact is, for those reasons the previous owner was planning to send the car to the junkyard. Keeping it as a gas car would have been too expensive and inconvenient.

But as an electric car, it's been very reliable. In four years, there have only been a handful of minor problems (one per year, on average) and none of them expensive to fix:

2) Operating costs: how much gasoline has been saved & electricity used?

3) Any lessons learned? What would I do differently?

I'm an efficiency enthusiast, so it irks me whenever I have to convert electricity into brake dust/heat.

Most of the time I drive as efficiently as I can. In city driving, that means minimizing the use of the brakes - it's one of the best energy-saving techniques (regardless of whether you're burning electrons or dinosaurs). As an efficiency strategy, coasting to decelerate always beats using regen.

But it's not possible to coast up to every stop or turn - eg. when going down hill, or when there are following drivers (whom you don't want to annoy). For those times I do have to get on the binders, I really wish I had regen.

It is possible - there are a number of ways to rig regenerative braking with a DC system. Even though they add a fair amount of complexity for a relatively small efficiency increase, having regen would make me an even happier EV driver. It's not on the to-do list, though. (Too many other projects!!!)

That's really no surprise, given that it's a lightly built, 20 year-old econobox, living in Ontario's rust belt.

The floors and rocker panels are getting kind of ratty, and without some quality time spent with a welder, this car won't be around much longer. It will be taken off the road this winter to keep it away from the salty mess on our roads. One more season soaking in briny slush would kill it.

So, if you're doing a conversion, make sure you get a vehicle that will last.

4) What's in the future for the ForkenSwift?

Well, the rust will be repaired, as will the always-slipping-apart coupler.

But I'm also keeping my eyes open for another host vehicle. If something cool turns up, the car's guts might find themselves re-incarnated in a more interesting vehicle that's better suited to the way the ForkenSwift is generally used (hauling stuff around town that's too big to carry on my bike!).